Gay Zurich has been selling her handmade art since she was seven years old and the look remains the same today, even though she no longer looks like she’s seven years old! 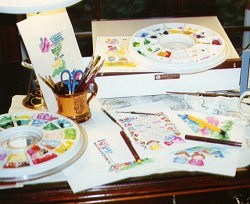 Gay draws much of her creativity and subject matter from everyday life.  Her colorful, original pictures are created primarily in watercolor, pen and ink.  Lithographic prints of her originals are produced, assembled and marketed directly from her home studio in Waukesha, Wisconsin.  Her original designs hang in bathrooms, bedrooms, kitchens, offices and boardrooms around the world.  Her art work has been featured in local and national newspapers and magazines, televised on the TODAY show, CNN, National Public Television, and PM Magazine.  She has done custom illustrations for Coca-Cola, 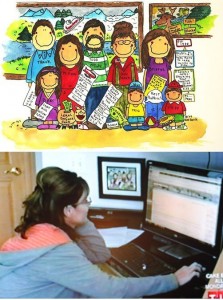 Wisconsin Bell Telephone, Marshall Fields, AT&T, Sycom Industries, the California based COPCO Kitchen Company, and the Oregon Popcorn Company.  Her “Good Cook” picture was commissioned as a cover design for an International Cookbook.  The Art & Soul logo was featured in the Land’s End Corporate Catalog.  People watching situation comedies on television have noticed her artwork hanging on the walls of the TV sets.  And, recipients of her personalized art have included Ross Perot, Richard Simmons, a former Miss America, a pilot of Air Force One and even Sarah Palin.

Gay received her Education & Art Degree from the University of Wisconsin at Whitewater.  She began her teaching career as a fifth-grade teacher at a local elementary school, and has taught art at both elementary and adult levels, as well as serving as a judge for many art shows.  Along with her art business, she currently teaches business classes at a local college, in which she instructs other artisans in marketing what they make, and she does Personalized Consulting Services for entrepreneurs.

In 1970, she did a special drawing of her mother, who liked it so much that Gay has been painting and selling her watercolor ‘ARTOONS ever since.  She, and nearly 10,000 of her Independent Sales Consultants and Artistic Personalizers, have sold millions of dollars worth of her work at thousands of Art Fairs all around the world.  She has displayed and sold her work at the famous Junior League Christmas Boutique Shows, better known as the Champaign Circuit of Christmas Boutiques, which are open to only 30 or 40 individual artisans throughout the United States.  Along with local art fairs and private home art shows, both Gay and her independent consultants collectively have shown her work at fine art shows and museums throughout all 50 states, as well as in Canada, Germany, France, England, and Japan.

Recently, Gay moved her company back into her home to operate her business by herself as she did in her early days.  She loves working from her home art studio which overlooks the woods in Waukesha County, Wisconsin.  When she isn’t dancing with her cat, Smokey (alias the Smokester, or Moke Moke), she paints and personalizes her art in front of a crackling fire in the fireplace while sipping a cup of steeping English tea or hot cocoa.

The wide selection and range of prices allows something for everyone.  Both watercolor originals, which sell for $1,000 and up, and signed and numbered lithographs are available and can be personalized in any manner desired.  Original caricatures start at $25 per character (a family of four would thus cost $100), and extensive and elaborate original paintings will cost up to $3,000. See more about Original Art.

You may purchase one of Gay’s personalized water color cartoons through her Art & Soul Catalog, which may be ordered by email or snail-mail at a cost of  $3.00.  You will receive a $5 refundable coupon with each catalogue, to be applied to your first order, and a $3.00 gift with every picture ordered.  Your order will be shipped within one week.